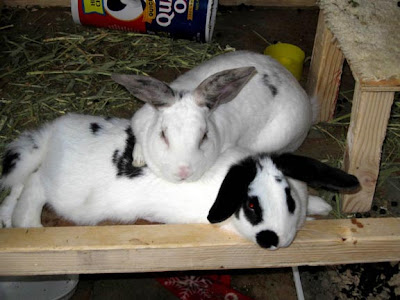 These two of the five little bunnies went off to a new home together and here is an early 2009 picture. The top bunny was "Angelina" when little, but now is "Jaxson" (It's a BOY!) and the bottom one was "Biggy Bunn" when little and "Calypso" when big. Calypso died very suddenly in 2009 from an intestinal problem :<(

I fed Angelina (Jaxson) when she(he) was teeny-tiny - feeding all five was a real team effort - three times a day! I went to visit Jaxson the other day and he came out and let me snuggle him and pet him. Jaxson attacks all other intruders except his owner! Good Deeds do pay off!

(The other two - Walter with the stripe and E.B. White - were also adopted to nice homes but we have lost touch with them.)

What sweet bunnies, and how great you've kept in touch with a few of them. Poor Calypso. A short life, but a well-loved bunny.

Poor Calypso! The two of them look so pretty and happy in the photo. It's good that you've been able to follow the progress of at least a few of them...

By the way I think I only found one rabbit scrabble game on the blogs, am i missing some?

I have just this moment discovered your blog and I am so excited!

It's silly really but even though I am bunny-mad and have been blogging for a couple of years, it's always about my business (Cottontails!) and I had never before thought to search for rabbit based blogs.

My bunny features very heavily in my blog. His name is Humphrey and he is very much in charge!

Again, so pleased to have found you!

Aww, its so nice to know what happens to them after they get sent off. We are waiting to here what happened to the cat that visited us.

Wow, how lucky you are to know how they are doing! I got to pet them too!