"HANG ON TIGHT A MINUTE BAX -

- I need to let a little air out - you are a bit over-inflated." - Your Beloved Zoey 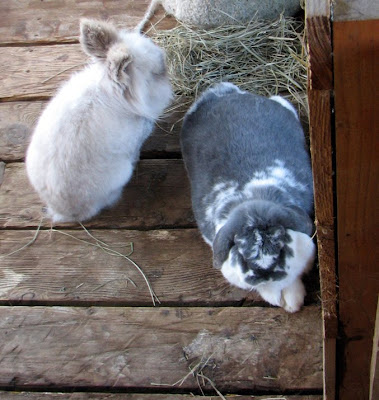 BEFORE - April, 2002
Looking off the upper deck toward the newly built bird feeding station. I took all the sod out of the paths, lined them with anti-weed paper, and laid down wood chips. The dirt edges were all dug down about a foot deep, and all the rocks were screened out. The dirt was amended with compost and peat moss and put back in. By now I have widened those edge beds to about 4 times that width - all the same process - ugh. A big wheelbarrow of dirt had a small wheelbarrow of rocks as a result! The path headed back to the lower-right goes to what are now grape vines and raised garden beds. The one going out the middle has an archway of a pretty pink climbing rose and honeysuckle. 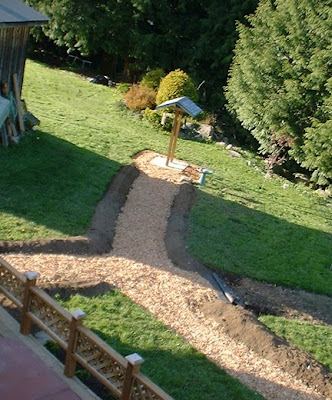 AFTER - May, 2010
There are those peonies and columbines that were in yesterday's picture. To the left of the path is a hedge of hemlock trees, pruned narrow and 5 feet tall. You see some Calla Lillies along there too. The mess by the corner of the hot-tub deck is Pampas grass ... dang stuff just grows, dies back, grows, etc. I probably will dig it out and try something else.
Anyway .. there is 8 years of digging, planting and growing. My gardening motto always is to get stuff planted, even little stuff - it will get big - you can always move it later. (Boy have I moved stuff - we had a LOT of gardening friends that delivered many pots of little plants when we first got here.) 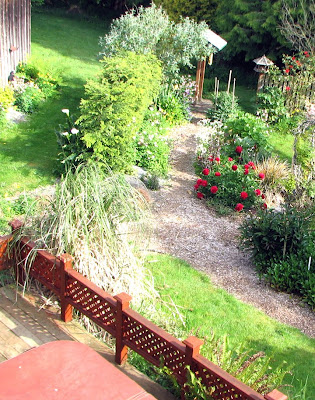 What a lot of work! But it looks great!

I love the bunny photo too, Zoey is so cute.

Thanks for your questions on my blog, I'll answer them in a separate post later this week.

Ok this is only my second year with a garden I feel better now.
Bax is lookin a bit "inflated" but adorable.

LOL, Baxter is just *pleasingly plump* and adorable! Your walkway and gardens are so beautiful!

What a wonderful shot of before and after! I will post a photo of our yard for your review and suggestions! Garden advice! We have a long sloping lot, with three separate garden areas (one bordered by stones, 2 by timbers) to keep the soil in. We have a narrow ditch and french drain just above the house to take some of the water away. I'm at a loss. All that room and I have no talent (and not a lot of time, but I'd make the time.)

Aww Zoey is such a thoughtful partner.

I can't believe the amount of work it must take to keep up a garden like that. You must be exhausted! It's beautiful though.

Great photos - it's amazing how the changes you made have brought so much colour and depth to the garden. Have you thought about putting a camelia, or another type of flowering shrub, where the pampas grass is? There's nothing like another workout in "mother nature's health club" is there!