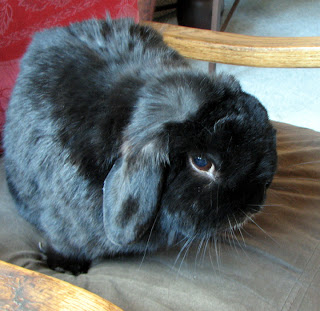 We had to have Winston euthanized today.  About 6 weeks ago he began favoring his left front paw.  After watching it for a bit, and seeing no improvement, he went to our veterinarian who took x-rays and discovered a tumor growing under Winnie's left shoulder.  He told us it was probably malignant, was painful, was beginning to affect his lungs, would continue to grow and there was no way to fix it.  He told us we could give Winnie a lot of Meta-cam and see how it goes.  And we did that but it grew and grew to where our boy could almost no longer get around and could not take care of himself - he was a constant mess.  He stayed as spunky as ever with a good appetite but it was just too much for him and for us.  How we will miss him.
Here are some older pictures, one with his mate Lucky from when he was still alive.
We are going to take a couple of days off here and get our heads and hearts back together.  I know how much you all thought of Winnie-Pooh-Pooh. 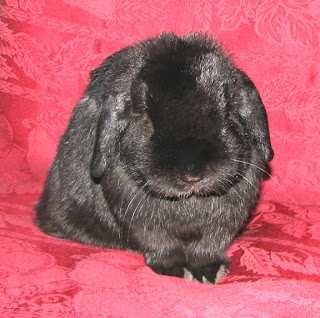 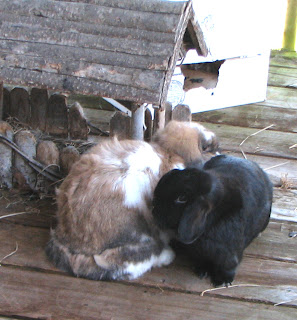 Oh, how awful. I'm so sorry. You gave him such a wonderful life. I'm so glad I got to see him one last time.

You are some of the finest bunny parents ever. Winnie had a great life with you, and I am so glad you shared him with us. Living on Metacam is no life. It is hard to let go, but you did what was best.
Love on the rest of the HOR, and be at peace. We all love you guys and I know we are all praying for BL and RG and KB. And of course, the bunns.

Binky free of pain, Winston, and have fun getting reacquainted with your old pals.

Our thoughts prayers and love are with you,Thanks you for giving Winston and all the buns a wonderful life.
Winston Binky Free Baby boy we will see you again!
With all our love Speedy and Rachel

Winston, thank you so much for all the good times. Binky free, Little Man, binky free. We are going to miss you so much. I know you are in a really good place, it's just that we wanted more time with you here. Take our love with you and go in peace.

I know Captain Winston will forever sail in your heart, pain free and paws full of mischief.

I'm so sorry. I know he and Lucky are getting into all sorts of mischief together on the other side of the bridge. Light, love and hugs to you all.

So very sorry.....bunnies have a way of enriching our lives and breaking our hearts. He was a sweet one.

All our thoughts (both bunny and human) are with you.

We'll miss you, Winston, but we'll see you again someday.

Nose bumps to your humans from both me & Betsy.

So very sorry! How vulnerable our hearts are to paw prints. There's another addition to the bright side of the Rainbow Bridge.

My heart is simply broken for you. Please know you are in my thoughts.

Winnie was such a honey bunn.Thank you for sharing your life with him and his life with us.

Hard to say goodbye to such a good bun! Winston was awesome. Hugs to you.

Our world is a little less bright today. We will be sending very special thoughts out to Winston as he makes his way over the Bridge, and everyone and everybun in the HoR are in our thoughts and prayers.

Hugs and much love,
Jade and Mr. Mick

So very sorry for your loss ♥

My hear hurts and my eyes are burning. I am so sorry for the loss of WinniePooh! You know I love that little guy!


My heart has joined the Thousand, for my friend stopped running today. - Hazel

I am so sorry to hear the news. I hope you all take comfort in knowing he had a wonderful life with all of you and that he is in a better place now. Hugs and nose bumps. --RB and Mario

We are so sorry to hear about Winston, we will miss him greatly!

oh that's so sad, but Winnie did have a happy life and he'll be reunited with lots of friends over the Rainbow Bridge.

So very sorry for your loss. He was a beautiful bunny and lucky to have you to love him so much.

Winston was so lucky to have such a loving home, and I know he will be sorely missed. I'm so sorry for your loss.

I'm so sorry about the loss of Winston RG & BL. Plenty of hugs and love to you both, and to the bunns. We'll miss ya Winnie :(

I'm so sorry for your loss. My Jasper and Benjamin are waiting for Winnie over the bridge.

Oh no... little cute black Winston! It is so hard when you loose a furry friend. We with Tina and Trixie are sorry for your loss.

So sorry to hear about gorgeous Winnie. He will be much missed. My thoughts are with you all at the HOR.

I'm so very for your loss. Binky free Winston.

Oh, oh, oh. So very sorry for the loss of Winnie. Hugs and prayers. Binky free, little Winston. We will miss you.

My friend Speedy told me about your dear Winston. We are so very sorry and send you lots of hugs and love.

We are so sorry for your loss.Many hugs and much love!! <3

Sorry to hear. He looks adorable and can only imagine how much he will be missed. Binky to Winston

I'm so very sorry for your loss. Rabbits bring so much job into our lives but it SO HARD when they leave us. My heart aches for you. Take heart in the lovely life you gave him. He's not suffering anymore. xo

So sorry to hear about Winston's passing on.

I'm so sorry for your loss. There's nothing harder than losing a bun love. What a lovely home and life you gave him, and what lovely love he gave you.

Sweet sweet Winston, you will be missed. I am so sorry for your loss BL and RG but I know what a wonderful and happy life Winston lead. Godspeed on your journey Winston.

Rest in Peace Winnie, we should all be so lucky to have wonderful compassionate care at the beginning of the Rainbow Bridge.

So sorry to hear Winston has gone to the big bunny garden, I hope you are all recovering, as best as can be, much love, Peta Bunny Warren xx

Oh, RG and BL, I've been away and just now saw this. I am so sorry for your loss. I admire people like you, who open their homes and hearts to so many bunnies knowing one day you'll have to say goodbye. I am grateful for people like you.