I, Zoey have some important announcements: Listen up! 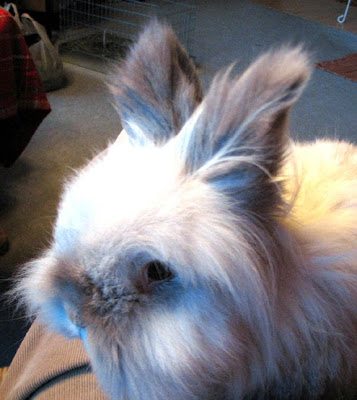 In Merry Old England live many bunnies. One is Cedric, a friend of ours. Cedric has a blog and it is Dandy's Journal. Cedric is Deputy Pry-minister of all of Lagamorphia - says he - and his mate Millie is Pry-minister. Cedric has bestowed honorable titles and responsibilities upon at least two bunnies here in the far Colonies (hee heee.) One is me and I am the Right Honorable Zoey, Ambassador to the Pacific Northwest Underdeveloped Regions. The other is Boogey and he is the Right Honorable Boogey Enrique Gallagher, Minister for Overseas Development. Boogey lives in Baton Rouge, thus the "Enrique", and mainly whines about LSU football and crows about Saints football.
Cedric also has a friend, Master-Dandy, who is the head of the LIA (Lagamorph Intelligence Agency) and Master-Dandy can appoint deserving Agents. Turns out Boogey is agent 0057. Recently I, Zoey, have been appointed agent 0090. I will be reporting on my LIA missions from time to time. Just thought you should know!
Cedric and a bunch of others get their people together now and then to produce songs about Rabbits and then other people can have a cd or dvd of the songs by making a donation to the rabbit charity of their choice. Some new ones are out, including Live-Hay'd '08, a must have!
SO - HOP over to Bunny Tunes and get shopping!
Thank you for your attention - as you were. .... Zoey
Brought to you by RG at 7:37 PM

Hear Ye! Hear Ye! Be it known that these honorable bunnies are hereby appointed and should be accorded all respect and obedience due their important stations.

Congrats Zoey! And thanks for spreading the word about Bunny Tunes!

Thanks for keeping us updated Zoey!

Congratulations again Zoey on your appointment.
And on becoming an LIA agent. Ninety agents - WOW! Just in case one of your friends decides to look into this, Master Dandy's journal can be found at:
http://master-dandy.livejournal.com/
I think your first mission has now been accomplished: spreading the word about Bunny Tunes is a unique way to help all of Lagamorphia!
I think your modesty forbade you to mention you are pictured on the first page of the website: www.bunnytunesusa.org where you are singing your heart out.
Bunny Tunes is an ongoing fundraiser for homeless or sick bunnies. Anybun who has purchased an album or has received one as a gift, is eligible to vote on the bunny tunes chart. You'd best hop to it, because voting ends Sunday night and the results are posted on Monday: http://dandybun.livejournal.com/590487.html
WheW - I hope you don't mind my making such a log post on your journal Zoey?

Maybe now that you are so important, you will be able to get your own hare-stylist.