.... For Benji, it is just about zero, or maybe one or two degrees from flat, maximum!  (It is quite toasty out today.) - RG the Geometer. 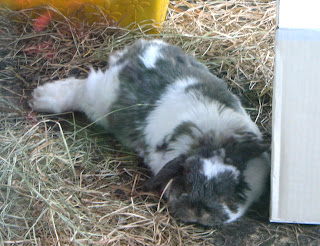 Now for a little more of that always welcomed House Of Rabbits History, Tidbits and Trivia!
The story, "Angle of Repose", is a well thought of novel by Wallace Stegner who also wrote a lot about how the western USA was explored and settled with various governmental policies in the mid 1800's.  (One of Stegner's students was Ken Kesey, who wrote "One Flew Over the Cuckoo's Nest."  Kesey was also famous for his trip in the bus named Further with the band of Merry Pranksters back in the hippie days ... which is the inspiration for that famous trip on the 7-Bunny-7 a few years ago - and which, of course, you can read about by going to the bottom of the list on the right.)

Still with us here?  Stegner also wrote a book called "Beyond the 100th Meridian" about those times in the west during the mid-1800's.  The 100th meridian goes right up through Texas, Oklahoma, Kansas, Nebraska, and So. and No. Dakota.  To the east of the 100th meridian there is enough rain to farm well, while not so to the west.  A great visual is below - the lights in the USA at night from space.  The 100th meridian is quite easy to see!  (You can even see Racer's nose glowing with such fierce inspiration, just below Vancouver B.C in the far upper left!) 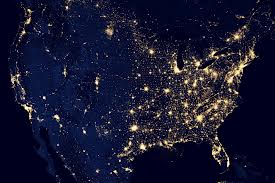 I meant Benji, of course. But that map is pretty out of sight, too!!!

I enjoyed that quite a lot, RG! Thank you, very much. Interesting. I especially like the part about Racer's nose! Benji is quite flat and very precious!

(FYI, to those who wished Luna's little foot well, THANK YOU! She still holds it up but I believe it is more habit now than because of pain ... her husbun, Jamal, now has a foot abscess that burst two nights ago... Never fear, though. Doc. W. has them both on pain relief, anti-inflammatories, and antibiotics. They are resting quite well in my master bathroom today on soft beds with all the required bunny comfort items very close...)

6Bs, thanks for keeping us posted. So scary. I want everything to be well all the time.

RG, Cool! Benji, I am flatter than you.

Always learn something new when I'm here. Thanks RG. Benji you are just flat out adorable.

We call Benji's pose the "loungey bunneh" pose--comfortable, but always ready to snap into action should a treat be for the taking!