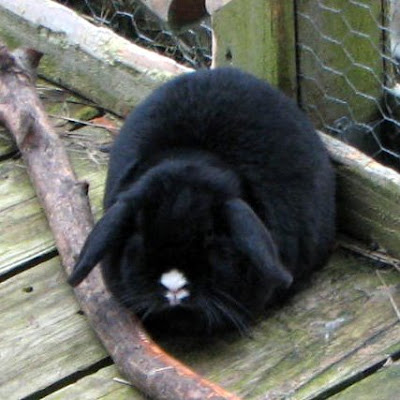 The Lops had the advantage, sort of, since there were 5 of them and only 4 Uppys. But the Uppys had The Princess. Baxter took the opening "carrot-toss" and rumbled, untouched, 95 binkys for a score. The play was contested because Zoey, an Uppy, but Baxter's beloved, sprung him with a fierce block on Savannah just as she was about to floor him. Racer allowed the play to stand after Lucky and Winston bribed him with a carrot, one of the many spares.
After a steady back-and-forth contest punctuated by many hops, flops, and eating of the game carrots, Goldie finally heaved a magnificent carrot toss to Benji who scampered into the end zone to even the score.
At this point Winston stole the last carrot from Chico and ate it.
With no more carrots to be had, the game was called - a tie - and all bunnies flopped to the ground, exhausted, happy and full. A good time was had by all.
Brought to you by RG at 6:56 PM

And the crowds went wild! But, what was the half-time entertainment?

That referee is adorable!

Did Bunny Lady cheerlead, too? I know I would've.

Butterscotch is envious, but thinks he could hide extra carrots under all his fur, which would give him an unfair advantage.

Hope you're putting that Half time entertainment on Utube. And 95 binkys is a lot!!!!!

How fun! And here we just went to a boring old super bowl party... I would have much rather been at the bunny bowl!

What a terrific play by play! I felt like I was there, cheering for both sides (although Freckles way leaning in favor of the Uppys!)
We're glad it was a tie, so there won't be any lingering fights at A Houseful of Rabbits!

What a great post. Mario had some pellets bet on the lops.

Who knows where to download XRumer 5.0 Palladium?
Help, please. All recommend this program to effectively advertise on the Internet, this is the best program!